You can get all the core RPG and expansion from Eon Legacy here!

Set hundreds of years in the future, where magic is real, monsters walk the streets, the wilds of the world had been restored, galactic travel is common and high-tech aliens vie for wealth and glory across the infinite realms in unending multitudes of alternative universes, and fractures of reality. Eon Legacy, takes an action-adventure RPG approach from it’s own rich original lore and with it’s great wealth of expanding content will keep the story going forever. 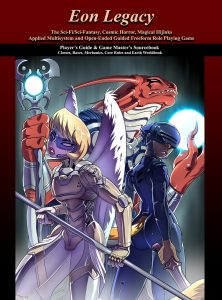 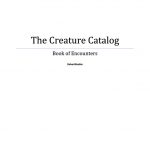 CREATURE CATALOG:
The Book of Encouters
THIS BOOK CONTAINS DOZENS OF OFFICIAL RACES TO EXPAND YOUR INFINITY!

This book was made with dozens of new creatures to add to your universe, multiverse, infinity and beyond!
It also includes the Omnitemplate which will let you expand vastly upon creatures, NPCS, and even more Player Character Races!

This is the 2nd official Expansion and 3rd official release in the Eon Legacy RPG serise. Contained herein is the information on two classes formed since Earth’s liberation with new equipment, artifacts, factions, and Space Craft standards.

The Imperial’s have bartered a peace with their longtime allies turned warden after their attempts on Humanity, the Drane, with a royal marriage between their once majestic Empress and the King of the dragons. Drane Guardians and Mages have been spread thin between the two galactic nations and even the Hydral have been pressured to aid the punished Imperial Galactic power while Humankind has made its way across the known universe and colonized the regions beyond the unclaimed territories; they rediscover long dead civilizations and make breakthrough innovations. The various galactic nations have a standing sense of peace but the need of the Katta weighs heavier every day but a recent event may change everything…